You’ve heard of the waltz. When a couple dances the waltz the gentleman and lady grasp each other’s hands, while the gentleman places his other hand on the lady’s waist and she places her other hand on his shoulder. From this possition they twirl around in a circle and progress around the room. But, in the Regency period it was considered inappropriate. Instead, the kind of dance you might find at a ball was more like a square dance. Couples lined up, men on one side and women on the other, then waited for their turn to dance a figure (a sequence of movements).

In the following video we can get a glimps of what it must have been like. It is a short clip of one of my all time favorite movies, “Pride & Prejudice” with Keira Knightley. It shows Mr. Darcy and Elizabeth Bennett as they dance. Unfortunately, it doesn’t start at the beginning of the dance where you see them lined up, but you will see it at the end of the dance. Please ignore the last 30 seconds, as this video comes from YouTube and it would take a lot of work to get the end taken off.

Did you notice how easy it was for them to carry on a conversation? Certainly, the dance is romantic enough, but not conducive for talking.

There are several things you do not do while dancing. Because everyone in the room is eather dancing or watching the dance, you do what it takes to follow the rules. Here are some examples:

Dancing has changed a lot since the early 19th century. Yet, there is a lot that’s the same. Which would you reather dance? A waltz or slow dance? Which one do you think is more romantic?

I am not one of those type of people who tells complete strangers their life’s history. I have to get to know people before I start telling you about myself. So, you’ll be happy to know that I’m not going to tell you what I ate for breakfast, if my son won his baseball game, or whatever else might be going on in my life. Don’t get me wrong, I like meeting new people and getting to know them, but that’s not what this blog is going to be about.

What I want to blog about is the book I wrote, “The Search”, and eventually tell you about the second and third book I have already started on. Yet, I know you don’t want me to go on and on and on and on about that either. So, I think I’ve come up with a solution. I’m going to tell you interesting facts (at least I find them interesting) about the time period and location my book takes place in, 1831 London or England.

For example, during the time when Dukes, Earls, and other peers had titles that meant something, a title was sometimes used as a nickname. In my book the hero’s title is the Earl of Prestonshire. His father’s title is the Duke of Blackfield. These names could come from a nearby town, forest, lake, river, or the county they came from. The Earl of Prestonshire is called Lord Preston by close family and friends. His real name is Mark Hurst III. His father’s nickname is Lord Black, but his wife hates the color black, so, refuses to call him Lord Black. Instead she uses his given name which you can probable figure out.

At this time you may be wondering how a father and son could both have a title when generally a title is inherited. Well, it is not unusual for a monarch to bestow a title of hirer rank to someone already with a title. In this case, an ancestor had the title of Earl of Prestonshire when the reigning king decided to give them the title of Duke of Blackfield. The first son of a titled peer was often granted the use of the lesser title.

So, I hope you found this entertaining. 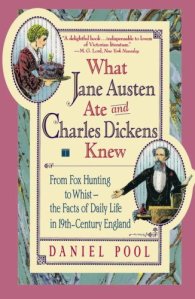 I do not consider myself to know all there is about the Georgian or Victorian era. If I have my fact wrong I welcome your feedback. I’m hoping to find some of the link to websites where I found a lot of my information. I also purchased a book that helped me tremendously. It is called “What Jane Austen Ate and Charles Dickens Knew: From Fox Hunting to Whist – the Facts of Daily Life in 19th-Century England” by Daniel Pool.

Did I explain myself well enough? Is there anything else you would like to know?